Register your company with Air Corporate

An annual general meeting, or AGM, is a key event for all Hong Kong companies.

Held once per year, the AGM provides a forum for company directors and shareholders to discuss the company’s performance and strategy.

It’s also an important opportunity to vote on key decisions and appointments.

In this article, we’ll take a closer look at what happens at an AGM meeting and why it’s so important for Hong Kong businesses.

The AGM is a chance for company directors and shareholders to come together and discuss the company’s performance.

This includes reviewing its financial results, discussing any major changes or challenges that have taken place, and setting future goals.

It’s also an opportunity to vote on important decisions, such as appointing new directors or changing the company’s registered office.

Why AGMs are important

Annual General Meetings are important because they allow shareholders to have a voice in the management of the company.

AGMs are required by law for all Hong Kong companies, and must be held at least once per year.

Here’s some things to note about AGMs in Hong Kong:

How to call and hold an AGM

An annual general meeting (AGM) is a mandatory requirement for all companies incorporated in Hong Kong.

All public and private limited companies must hold an AGM every year, during which directors and shareholders can discuss matters of concern related to the company’s development and operations.

The meeting also provides shareholders with an opportunity to ask questions and cast their votes on resolutions put forth by the directors.

An AGM can be called by either the directors or the shareholders of a company.

The procedure for calling an AGM meeting is as follows:

The directors of a company are responsible for calling an AGM and ensuring that all relevant documents are prepared and circulated in good time to shareholders.

It is important that a quorum is present at the meeting in order to pass resolutions, and directors should be aware of their responsibilities under the law when it comes to holding AGMs.

Hong Kong companies must comply with the Companies Ordinance in order to hold a valid AGM.

The annual general meeting of a company is an important event in its calendar, as it provides directors and shareholders with the opportunity to discuss matters relating to the business’s development and operations.

AGMs must be held by all companies incorporated in Hong Kong, and there are strict laws governing how they should be conducted.

The Companies Ordinance outlines exactly what needs to happen at an AGM, from preparation through to ensuring adequate quorums for resolutions being passed during proceedings – which may include appointing auditors or amending articles of association that affect future decisions made within private limited firms operating locally here on HK Island (such as changing who has power over management).

Are you looking to incorporate your business in Hong Kong?

All your annual general meeting needs are taken care of if you choose Air Corporate as your company secretary. 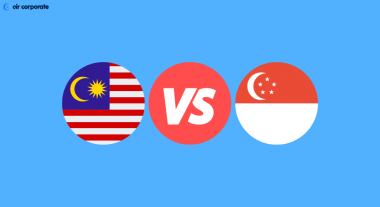 Doing Business in Singapore vs Malaysia

Starting a business abroad is a very planning-heavy task, and generally the first thing one needs to figure out before planning anything else, is where should the company be based? Even if the company is to be remotely registered in another country, where it’s registered is crucial to one’s incorporation and set up headaches, income […] 20 FAQs About Company Formation in Singapore

3 Easy Steps to Starting a Business in Singapore

International enterprises and entrepreneurs may choose to establish a company in Singapore for a variety of reasons: It is Asia’s leading innovation hub, the second-easiest place to do business in the world, and enterprises may be established in as little as 15 minutes (fastest in Southeast Asia). We’ve outlined the three basic processes for launching […] Chat with us on WhatsApp

Scan the QR code or click the link below